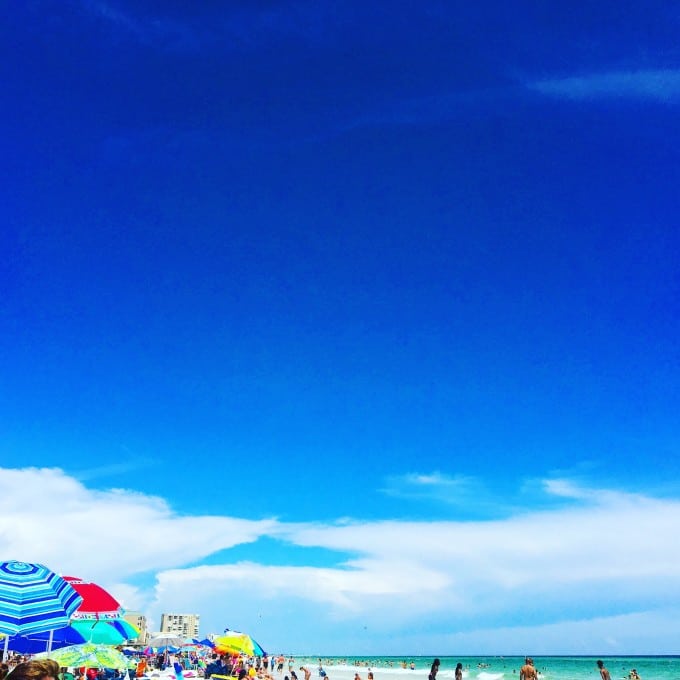 Club Wyndham Beach Street Cottages is in Destin Florida. I was already in town since this was the second resort in the area I was staying at this week. I was moving over to this resort to share the experience with you and write this trip up. It was hard to leave the last resort I had just stayed at Club Wyndham Emerald Grande™ at Destin and that was a great resort.

I was looking forward to staying here because it was such a different style of resort. I felt like I was getting the best of both worlds in a one-week-long trip.

Since I was just moving from one location to another, the move over was a breeze. Destin itself is not hard to get to, but for most the drive over from Jacksonville, or an International Airport is a little long. So transferring from another local resort to this one was making life supper easy.

I had hours before check in still so I headed to breakfast. I had been looking for a breakfast buffet in town. I had already had a great breakfast a few days , but I wanted a real buffet to try many items out. I found one just up the road a bit at a restaurant in the Hilton Hotel called Sandcastles. I have linked to the menu here. For a buffet it is at about $20 per person which these days I feel is reasonable.

The food for a buffet was top-notch. There were many made to order items which is always a win made-to-order eggs and omelets, pancakes, breakfast potatoes, sausage and bacon, seasonal fruits, cereals, yogurts and fresh-baked pastries, coffee, tea or juice. There were tons of good food, but I would have liked to see more options. You will not go away hungry here, but I am an over-the-top guy with buffets.

So I would have liked to see a table of pastries, cinnamon rolls, and more options as far as breakfast meats go. Then regional items like grits, and some kind of breakfast hash brown casserole or something. Weird to mention I guess, but I had just gotten back a few weeks ago from Vegas and the buffets there are insane.

After a large breakfast, and a good tasting omelet, I drove around the area around Miramar, and Santa Rosa beaches since that was close to the restaurant.

Next it was time to head back up towards Destin and find the resort and check-in.

This resort has a neat feeling about it. Each building looks like their own little cottages (hence the name) but in reality, the resort has many 1-bedroom units in these cottages. It is an interesting concept that is realized in a fun way.

These units are smaller being around 600 sq ft but big enough to have a queen size bed, bunk beds and a sleeper sofa in most units. There is also a small kitchenette. For this size unit I think it would be great for a family of 4 with younger kids that are still that age for the bunk beds.

After getting sorted and setting up in the room, I took a look around the resort and the layout. There is a nice central pool here, and a short walk to beach access which is fun.

You do have to cross the road to get to the beach so just keep an eye on the kids. The beach here is very nice with the white sandy beach that Destin is known for.

This is technically Miramar beach, so closer to my breakfast spot than Destin but on the same stretch of beach.

I spent the rest of the day on the beach just hanging out and waiting to see the Sunset. Close to the beach access point is Captain Dave’s, so I decided to eat there and try it out.

I started my meal with the appetizer hot dang shrimp which reminded me of the restaurant Bonefish Grills Bang Bang shrimp which is one of my favorite shrimp dishes. For the entrée I chose a grilled mahi mahi which is a fish I do enjoy a great deal when it is cooked right, and this was. Feeling thirsty for more than just sweet tea I ordered a few of Dave’s Punch, which was a 4 rum punch that also had OJ, pineapple, and cranberry juices. Those were tasty!

After this it was a quick walk back to the resort (literally like a single football field away.

Ouch, I did it again. I left the drapes wide open and the Florida sun woke me about 30 minutes after it rose in the sky. You forget how wonderfully bright the Florida sun is, especially a few hundred feet from those white sand beaches, and all that water.

I felt like I may have gotten some vitamin D while still in bed. I went to the beach since I was wide awake and stayed there just playing in the water until hunger hit me.

After going back to the cottage and showing, I headed for a place I had seen on the food network for a late breakfast, early lunch kind of thing. The location is called Maple Street Biscuits I had seen a friend chicken sandwich with goat cheese they served about 4 months ago and somehow; I remembered it, and felt like I had to try one.

Now this place is a one-trick pony. Biscuits are their thing, and they are even pricey biscuits. But oh, wow, are they worth every penny. No wonder this place does a great business. Yes, there are other items on the menu, but I did not try them all. I did however eat 2 of these $10 biscuits and was happy to pay for them. Yum. Then I purchased a couple of their cinnamon iced biscuits to take back to the resort. I figured they could be breakfast, or even dessert if I could not wait until breakfast time tomorrow.

I had not been to an Axe Throwing place before. (Even though there is one near me). So today was the day. I would have expected this place to at least serve beer, but it is a BYOB spot. Which is OK, but just seemed like it was likely the only way to get the business approved for the area.

Which seems smart in one way, and silly in another. Why not let the business sell the item that their customer can bring with them? The end result is still people drinking and throwing deadly items around. What can go wrong?

When I think about it more, it could just be a liability and insurance thing. It is a funny idea for a business, but it is unique and not a costly form of entertainment. The coach came to show me the axe throwing, but to save him time I asked if I could throw once before the lesson. Bang center target first try. He laughed and said, “hey I think you are good, need anything?” I thanked him and said no thank you.

You see, I have not been to an axe throwing business before, but I grew up chopping wood for extra money since at that time I lived in a rural county. I also spent 25 years in the martial arts. While no martial art teaches you to throw axes that I am aware of, you do get a ton of weapons training that applies to this in odd ways.

I found it interesting that this business has a location in Florida and one in Arkansas they seem worlds apart. But I had I fun time. I did just an hour of axe throwing because when it is a single person, that is one heck of a lot of throwing. This would be fun for groups to so and bring a few beers for some competition and laughs.

After throwing axes instead of a fit for an hour, I headed back towards the beach. There I stayed on the perfect white sand until sunset.

After sunset with the last of the day’s light I went to Kenny D’s right by the cottages. Man, this was Cajun food at the beach and it was great. Also, since it is a to go style set up, the prices were great too.

I had the gumbo and the shrimp creole and was in fat guy food heaven. The owner seems like a hardworking and nice guy. Anytime I am in the area, I will certainly come back for more. If I had a business in the area, this is the guy I would get to cook for my events. Just quality seafood.

Kenny D’s is the kind of place that people in town would tell you about, but you likely would not find on your own. I just got lucky that it was here at the doorstep (almost) of these cottages.

Day Three a day on the beach

With the beach right across the road it was hard not to get up, have a light breakfast in my room and then head to the beach. I had slept in some I think it was around 9 AM when I hit the beach.

The beach itself here is not to packed which I appreciate. I like that you can go put down a beach towel and not be in a sea of people. Sure there are some times when people watching is fun, but packing yourself in like sardines is never a great feeling.

Here the beach had a few others around me from this resort or another nearby, but not many and that made the experience special. Today it was hot enough to swim in the ocean and play around some. Here the waves were not large at all, more of just enough to hear the great sound and feel the salt in the air thanks to the crashing spray on the beach from those waves. To see what the waves are like you can look at a nearby webcam live here. Or here is another one with a different view.

The section of beach near the resort has less people on it than these webcams will probably show because they are in front of larger resorts.

The beach was great and at lunch I had to go see my new favorite chef at  Kenny D’s again. The food is right there by the resort and some of the best you can get anywhere. The owners seem nice as well, which is a plus. Today I had his Cajun Ken’s Fish Couvillion which was Mahi Mahi the chefs Cajun way and it was amazing.

The only thing I miss at Kenny D’s is the drinks from New Orleans, but hey you can’t have it all.

Hanging out on a white sand beach that was not crowded and feeling a bit like you owned it reminded me of my trips to Grand Cayman and 7-mile beach. Just like 7-mile beach there are crowded parts of the beach here, but this resort was near a place that made you feel like you had it to yourself, which was a treat.

When I look back on this week where I spent the first part of the week at the larger resort and then I came here, it is hard to say which I liked more. The food thanks to Kenny D was certainly better here, but the activities were better at the other location. Here you had killer beach access, but crab island was a great experience as well. You will have to check both out on the websites yourself, but just make sure you book through Tzort to get the best deal.