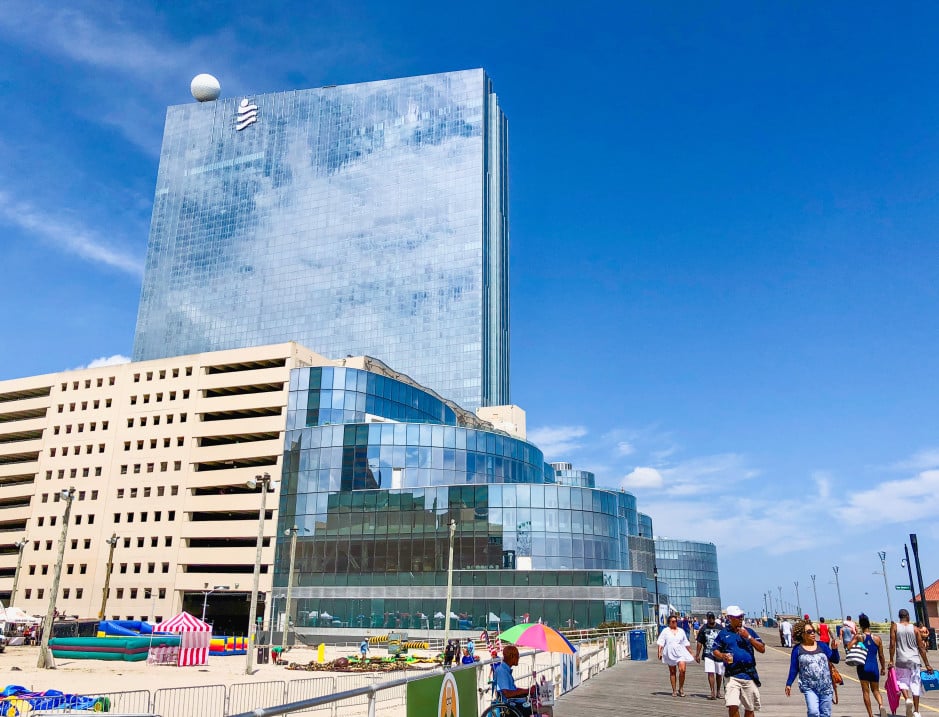 Bluegreen at Atlantic Palace is an Atlantic City vacation location to love. Oceanfront rooms and a killer location, it is hard not to fall in love with Atlantic Palace.

Day One Arrival at Bluegreen at Atlantic Palace

I drove up the Eastern Shore as my chosen path to Atlantic City on this trip. I even managed to catch the Cap May Ferry and save some time by going along for the ride. Not only does the ferry save time, it is also fun.

all in all the drive time and ferry time made it about 6 hours or so with light traffic, so it was not bad. I looked forward to seeing the resort that would be my port of call as I gambled some, took in some shows, and likely ate more than I should.

For Atlantic City, the 31 story Bluegreen at Atlantic Palace is a standout. I had a 1-bedroom booked that was 688 sq ft in size and the larger of the 1-bedroom units. They also have 2-bedroom units here and many suites of various designs and layouts.

The villa amenities were nice and fairly standard.

The only thing I did not see when I checked on was a washer and dryer in the unit but given that the beach was for me more of a secondary item, I was OK without.

My room has both a water view and a bit of a city view from different sets of windows. It really gave you a sense of how high up you were in the tower, which was fun. The last dozen resorts I had stayed at were much smaller, and I think the highest floor I had been on was 5 in my recent travels. Here I was 4 times that high, and I liked it.

Once I got settles in, I went almost running towards the Sauna and Steam rooms. It had been too long since I enjoyed a good Sauna, and the steam room was a treat because I had not been in one for at least 3 years. Everywhere I had stayed simply did not offer them. I guess they are a pain to maintain.

In a good sauna or steam room you can feel the stress leaving your body. That heat it is funny how much I enjoy it yet despise a 90-degree day. Maybe it is because it is easier to control your heat exposer when it is confined to rooms just made for that purpose.

Next it was time for a shower, then finding somewhere great to eat dinner. I headed for the simply named “The Buffet” at the Golden Nugget. As the name suggests it is “The Buffet” they have literally everything you can image, or want. After eating too much, I walked into the casino and played for a bit. I started a new player’s card here, and I already have one going at Bally’s so that was likely next on my list to go to.

If you are not a gambler, or do not know the players cards track your spending when gambling and can earn your comps or free shows, food, services and more. It is the Atlantic City or Vegas way of encouraging you to keep playing and spending more at their casinos. If you are clever, you can work these systems a little and get some nice free things as you play in the casinos. For big gamblers you are foolish not to get them, and for lower wager gamblers the savings can make up for some losses, and make your vacation more enjoyable.

After playing for a few hours, I chose to move over to Bally’s since I already had a much larger player balance or amount of spending that had gone through that account and card. I had been to Vegas, and Atlantic City already this year and had the card active on both of those previous trips.

My player club membership was just the black level with Bally’s but it does come with several perks right away, even before you spend more on your current trip. One of those is free valet parking,, so I took advantage of that. At the time, you also were getting a free dinner when you presented the card once on your trip. Although I was saving mine for tomorrow night. These promotions always are changing, so ask a host or check the website for updates.

Once inside, I worked my way to the slots first. I often like to go to a high traffic area (one with a good deal of foot traffic) and spend some time at those machines. My theory (backed by personal testing) is that these machines payout slightly better than the ones on the inside areas. The reason I believe this is true is that the casinos want people to see and hear winners to entice them to move in to the slots area and play.

I did OK for a few hours and as things slowed down, I moved over to black jack. It was getting late now, so I was not going to play much longer, but I like black jack and wanted to check the tables out myself today. Here I managed to win a few hands fast with 2 blackjacks and a split that went my way on some decent sized bets. I figured I should quit while I was ahead and still sober and go back to the resort. I had enjoyed likely too many good beverages to drive, but it was less than half-a-mile back to the resort so I just hoofed it (walked back).

Day Two at Bluegreen at Atlantic

I had stayed out playing until like 2 AM or so ultimately and then walked back to the resort. So today I was going to walk somewhere close by and grab breakfast, then head back to Bally’s where I had the valet park my car the night before.

Very close to the resort was a neat hole in the wall kind of place called My Friends Diner I do not even think they have a website but this link goes to their Facebook page. The food was good, and the people were nice. It is an inexpensive paper placemat kind of place, but just what my body needed after the night of gambling and drinking.

On my walk back I noticed that Bally’s is just beyond a park on the boardwalk that included the NJ Korean War Memorial so I stopped and checked that out. Thinking for a few moments about our brave soldiers from that war.

I was on a bit of a good run last night, so I stopped by a blackjack table to see if I was still running hot. I was not and figured that out in about 40 costly minutes. This meant I was going to get the car and regroup back at the resort.

The pool was open,, so I decided to check it out since it was heated. The air outside was in the 60s which feels warm until you are wet. But I was ready and had a towel and then moved in to the sauna and steam room to return my body to normal temperatures and beyond.

After that bit of fun, I chose to shower, dress, and check out more of the boardwalk. The boardwalk is not what it once was, but few boardwalks are, I guess. There are still some neat spots to see, and good places to step into for a snack. I grabbed a funnel cake since I had not had one in at least 5 years or so. How can you go wrong with fried batter, almost like pancake batter, and powdered sugar?

Afterwards I was feeling like treating myself with some of my winnings so I stopped at Ping’s Palace which is a massage establishment before the War Memorial and Park when walking from the resort.

I had two massage therapists work on me at the same time for I think about $2 a minute, which was worth every penny. You can get one person for $1 a minute, which is a bargain. $60 for an hour is a hard price to beat.

For myself I wanted my shoulders and neck worked on, then my calves from my recent walks. Since I am not much of a walker, it felt amazing to get those muscles loosened up.

After that, it was back to the resort to shower and change for dinner. I was going to hit Bally’s up for my dinner credit as a player tonight. I had not been to Guy Fieri’s Chophouse,, so that is where I chose to get my meal. The credit was for up to $100, so I hit Guy hard and chose the Baja Shrimp, a Caesar Salad, and then Grilled Fillet. All was excellent. If I was getting it at home and paying for it, I am not sure I would have added the extras, but I managed it all and even had a cocktail to. After I tipped beyond the credit amount, it was a $130 meal that I only paid $30 for via a tip so it was a great experience. Made using the card worthwhile.

The next thing I did was head back to the tables, so I guess it worked well for Bally’s too. Or would have had I not won some again. Now do not get me wrong, I am not paying off my mortgage with these wins or getting a new car. Just doing OK and having fun. I think after a few hours I have fun enough through the card again to earn a free show if there was something happening, I wanted to see on the strip.

I had not seen Weird Al live before and he was in town, so I went and saw if I could work out a comped ticket. It was a good thing I was solo on this trip because I can not imagine anyone I know wanting to go. But I used to like the Doctor Demento Radio program and thought if I was a few drinks in it would be a blast to see Weird Al do his thing.

It was a blast for a fan like me, and I even got to meet him briefly afterwards. I think the casino guy thought I was like a supper fan so he hooked me up with some level of backstage something or other. It was cool we talked for like 3 minutes and I just thanked him for all the laughs and wished him well. He was a nice guy.

I drove back from the off strip show and was at the resort in time for a nightcap. Tomorrow I wanted to get up early and do something on the boardwalk that was fun. I was only staying in the resort for 2 nights so I was checking out in the AM.

Day Three Check Out and an early start

I woke up early to get breakfast at one of the breakfast buffets. A few of the buffets were not open today,, so I went to one at the Hard Rock Café and it was very good. Breakfast or Brunch buffets are my favorite. I just enjoy freshly made omelets, pancakes, and all the various breakfast meats and sides. I am a sucker for , really.

This was a great start to the day. From here I could also see part of the boardwalk I had missed the first two days. Afterwards I stopped in the casino just because I have not played at hard rock before and wanted to check them out.

Now on this trip I gambled a good bit, ate out a ton, and even saw a show. But some of the best relaxation and experiences I had were at this resort. If you want to stay here, make sure you book online at TZort.