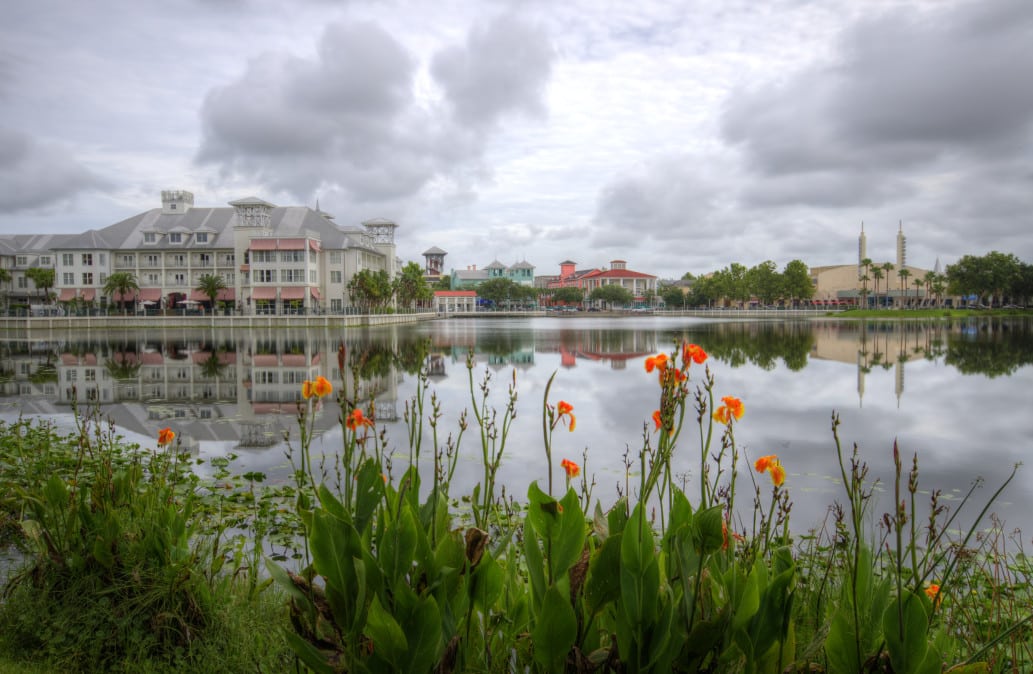 Club Wyndham Cypress Palms is in Kissimmee Florida. For the uninitiated, this is basically Orlando. It is very close to Disney and ideal for the traveler who wants to hit the parks hard. I myself love Disney and Universal. I also wanted to check out some other parks in the area.

Day One Arrival at Cypress Palms

Orlando or Kissimmee are about 12.5 hour drive from my home. So, I stopped in South Carolina on the way down and drove the remaining 4 hours this morning into the resort.

The resort has a nice virtual tour where you can see 360 views of the location. Looking at the tour, you will see the resort has several nice pools and an outdoor hot tub. Good options if you are with the family and wear yourselves out, but the kids still need more entertainment. Unleash them at the pool and watch on from the loungers.

There is also a playground for younger kids, and a fitness center for the athletic folks reading.

I toured the grounds and found my way around since I was way too early for check in. After a while at the pool, I was able to check in and get settled before my stomach called for me to take action.

Thanks to online reviews I found a spot not far away called Paul’s Italian Deli & Restaurant the food was affordable and very high quality. I think reputation is so good these guys have not bothered with a website. Man, these days that is confidence in your food. I had a great sub that hit the spot. I also took back some solid dinner quality Italian food (Lasagna) back to the resort.

My room was a one-bedroom deluxe unit, and it was huge. I think it was almost 900 square feet in size. My little two-bedroom home I have now is only a little bigger than that. This meant everything was a nice size and made you feel like you were truly staying in a resort. I have stayed at both Disney and Universal resorts before and those always are nice, but they feel like hotels. This was a nice Florida resort with a great layout and a nice set up. A wonderful place to call your home base of operations for the vacation.

Now knowing how nuts I am for all things Disney and Universal, this will come as a shock to someone that has read my blogs before. Maybe everyone but I was feeling pulled to go to a smaller park today. So I chose something out of the ordinary for me.

The Holy Land Experience now this park is not a billion dollar enterprise, but they do have some good shows, and the feeling of seeing replicas of the holy land appealed to me. I do not think I will ever travel overseas to Israel to see the Holy Land myself. For the price of a park admission I could feel a little closer. Not preaching, but I am a man of faith, though my journey to it was a winding road. I also am not traditional in any way.

If you and or members of your family have strong faith, this park is worth the day. You can see some nice replicas of the Tomb, Lazarus House, the Wilderness Tabernacle, and many shows and experiences. Then there is a large biblical collection in the Scriptorium. Some artifacts here are over 4,000 years old. Which for a history nut like me was interesting on its own.

If you are not a person of faith or interest, give this one a hard pass, however. I do not think it will convert you, or entertain you much. But for those who believe or want to, this is a great experience.

After half a day at the park, I was good and felt the call to go try another small park out for the second half of the day. With the smaller parks, you can do that. Spend one day and do it all, or a few hours, and do enough of it.

There are many small amusement parks in the area. This means many of the options. I had been years (like 20) but I thought I would go to SeaWorld. Part of it would be a great trip down memory lane, the other would be nice to see the sea life and those that truly care for them.

If I lived in Florida, this is a park or rather group of parks, I would get the annual pass to for certain. The pass includes free parking, and even free guest tickets as well with your pass. So that would be a no-brainer for entertaining visiting family and myself.

As it was, I grabbed a day pass and paid for parking. Just one look at the Sea World Map and you can see I was going to do some more walking today. But I knew from experience, albeit old ones it would be worth it. Now I know I always enjoy Disney and Universal when I go, but wow this is an amazing place as well. You know I enjoy amusement parks so much if I won the lottery, I would get season passes to all of them and move down here for at least a year or two. I would have fun and stay very active in the process, likely getting back into much better shape.

I am not a huge ride guy. Truly a bit of a wimp in that category. That is funny to my close friends that know it. Here is this huge tough-looking guy that stays away from roller coasters, but hey I am what I am.

Here though, there will several rides I enjoyed like the journey to Atlantis. Think of a large floom ride that has a giant drop at the end. It has plenty to look at and was a fun ride. There was also a large water ride called Infinity Falls that was wet but fun. If it had not been 80 outside, I likely would have skipped this one because you pretty much have to get wet along the way.

One of the great things about Sea World is the exhibits and attractions with wildlife. Then the Orca show. No matter what changes go on in society, I hope they keep the Orca show because it makes you feel a connection to these amazing creatures, and on many levels that has to be good for man and animal alike.

There are times these days when I think if I live long enough, I will be put in an exhibit for others to see. Here is the last socially unacceptable independent businessman in the United States. Look at his grey hair and listen to his thoughts about topics no one dares to talk about anymore. LOL well, the news makes you think that way someday.

I think most of us may not agree politically, but if we look at things with common sense outside of a political lens, many of us agree on the big things. Those like family, caring for loved ones, love of our friends, and hometowns. We also want to be successful as we define it and want to be able to make choices for ourselves.

It was time to choose either Universal or Disney. I looked at the newest attractions I had not seen (both parks have added a lot in the last few years). I had been fortunate enough to have been in the last 6 months (thanks to TZort) so I had a good idea of what I wanted to do.
I headed for Disney and Hollywood Studios first. There were several Star Wars things I did not get to on my last trip, and I wanted to see them all. I had a 9 movie multi decade investment in this storyline and I liked it all.

Here the Star Tours ride was worth doing several times to catch it all. Then I moved to the 50s prime time café for a lunch that tasted a bit like home cooking. A sampler style meal later and I was back on the move.

This was the moment that I realized that I had not been to Disney’s Avatar yet. I enjoyed that movie and the related storyline as well, so I changed direction and exited stage right. (Think that is more of a Hanna Barbera term lol–should have saved that for Universal).

Man, was this new Avatar section cool. Pandora was a great new park. Wow it was just jammed packed full of Disney Magic. I am a simple man and I really enjoyed the Navi River Journey slow but full of Disney fun.

I also liked the other activities and rides as well. The Flight of Passage is a must here. The visuals in this area are beyond imagination. You feel at times in the valley of Mo’ ara that you are in Pandora for a second or two. Given that you are in a theme park with thousands of others, that is a feat of true Imagineering.

Wow, today was moving along much faster than I wanted it to. I could spend a day in this park alone, but if I did not make it to some Disney Kingdom spots on this trip, I might cry a little on the inside. So, I changed parks a third time and headed to ride it’s a small world, and go to the Tiki Room. The Enchanted Tiki Room has literally been a part of my life as far back as I have memories. I have come to Orlando and done Universal and not visited, but if I get to Disney; I am always going to see it. It is a simple show, but important to me personally, so that is why I go. As I sit in the show, I can almost feel my Grandfather or Father next to me. Watching on as they did 40 years or more ago. It is almost that the memory is so strong I feel I can reach out and touch them.

After the enchanted Tiki room I headed back to the resort. I think I spent 10 hours at the parks today and that was great fun but also a lot of walking. Also, something about the pollen in all the fresh flowers. My body does not process it well by day three. The allergies start to kick in. I should have taken something on day two but I just forgot because I was having such a good time.

If you want to have the Disney or Universal vacation of a lifetime do not forget this resort, or TZort to get the very best value and price.