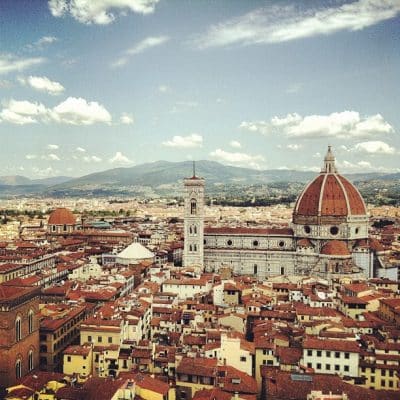 Wow, this job is even more amazing every day. Now I get to share travels with you on trips overseas. I travel a good deal, but other than the Caribbean, or Mexico, I have not traveled outside of the United States much. The closest I have gotten before this trip is watching the travel channel or before that a good travel series on PBS.

Now on this journey, I get to travel to Italy and see my people. Not my genetic people, but my adopted people because of their food, and the amount of marinara that has slowly over 50 years replaced my own blood. I do not think there has been a week in my life that I did not have at least 2 Italian dishes for meals. To be able to taste the real thing, with fresh ingredients, in the amazing settings is something I treasure.

Every trip like this starts with flights. I was a little shocked that the flight time would be less than it was to Hawaii. Just over 13 hours of travel time. Now there are cheaper routes that include more layovers, and if you can handle that, it may be worth it for the savings on the flights.

My flights started in Norfolk, VA, then went to Newark. From there I traveled to Munich, and then finally on to Florence. Newark to Munich was the long leg at over 7 hours. Which was long, but better than some flights I had been on. As a side note, Lufthansa was better than the online reviews had me think was possible. There was one delay, and the overworked crew were professional, but they did seem overworked and tired. Air Dolomiti was the connecting flight provided from Munich and they were great.

From the Airport it was about a 1 hour drive to the resort. If you are OK with driving overseas, I would rent a car because you will want to travel and see the area.

I drove carefully in my rental car, just wanting to get to the resort first, then go out later and drive on the amazing small historic roads and see all I could see during my stay.

Since the flight are pricy, I will be staying at one resort after another for a little over 2 weeks. It is my ultimate working vacation, with my only work being writing to you about my experiences, and my stays.

I am horrible at learning languages. I always feel a little jealous of those who have the ability to learn other languages. I can, however, do a killer impression of Sid Caesar, the comedian known for his ability to fake speaking many languages. I can fake a knowledge of a language for fun or laughter, but it likely would sound insulting to a native speaker. Of all the languages, to fake Italian is one I truly love because it seems so musical. Well that and like most American males, I love the Godfather movies, and Goodfellas and so on. Those images of the ultimate tough guy come to mind when you hear a powerful Italian accent.

Once you are here, you notice that instead of being intimidating, the ageing Italian population seems very kind, and engaging.

As I approached the resort, I realized it was in wine country and surrounded by local vineyards and wineries. The ground all around you on all sides of the roadways were full of grapes, and stair stepped cultivated perfection.

The scale of wine production here in this region made California pale in comparison. After checking in and getting to my one-bedroom suite, I was starving and tired, but starving won the battle. So I asked about a great local spot and was directed just up the road to The Locanda degli Artisti. Imagine a true authentic Italian pizza spot that is in a medieval castle.

This Tuscany vacation resort is located in the quaint village of Selvatelle, offering one of the most picturesque settings in Pisa, Italy. Stay in a spacious multi-bedroom suite with a full kitchen, incredible views and a range of special amenities, including a private lounge and resort-style pool. It’s all within a short drive from Italy’s best beaches and the celebrated city of Florence.

Video by The Tour Guy

Among other popular Italian cities, such as Venice or Rome, Florence is in a different league. Florence is beautiful, historic, and overflowing with Renaissance architecture and cultural treasures. Working out the best places to go in Florence is more a question of where to begin than what to see.

Florence is a beautiful city with lots of great things to see. You should plan your trip here carefully because there are so many places to go. You can see some of the most famous sights in the world here.

You’ll spend most of your time in Florence visiting museums, monuments, churches, and other historical landmarks. There are plenty of things to do in this part of town. You should walk around and enjoy the sights.

There are two main types of people in Florence. Travelers, and the local seniors. Italy is an aging country. The national average age in Italy is 47., so it is about 10 years older than the United States.

Strozzi Palace is a beautiful building located in Florence. The palace was built by the famous Florentine merchant Stefano di Niccolò de’ Medici. This palace is also known as Palazzo Strozzi. There is an exhibition called “The Great Italian Renaissance” held here every year.

A great museum with lots of art. You should go see some art.

Sculpture of David was created by Michelangelo. He was born in 1475 and died in 1564. He was an Italian artist who worked during the Renaissance period. The sculpture of David is located in the Accademia Gallery.

The Palazzo Vecchio is the most famous building in Florence. It’s also very large, but it’s easy to get around because there are many staircases. You’ll see lots of people enjoying the view from the top of the tower.

The Salone dei Cinquecento is a large room featuring paintings depicting famous battles such as the Battle of Anghiari (1443) and the Battle of Fornovo (1495). The ceiling is decorated with gold panels, and there are two long frescoes on each side. Head up to the mezzenine to see some of the artwork more closely.

Florence Cathedral is the most famous landmark in Florence. It’s built over 172 years, starting in 1296. It’s Gothic in style, but it’s not in the light and graceful way you think of Paris’s Notre Dame.

You should start with the stunning duomo museum, the museo dell’opera del duomo, to get the historic background for all these structures. It is housed in the piazza del duomo at the back of giotto’s bell tower, behind the duomo apse. The space is a fabulous treasure chest of sculpture. Its rooftop terasse also offers a mesmerizing view of brunelleschi’s dome. The first thing you see here is the museum’s well-lit showstopper in the hall of paradise. The hall contains a majestic reconstruction of a duomo facade designed by the very first duomo architect arnolfo di cambio. In 1587 it was torn down to create room for a renaissance facade (that was never finished).

Next, walk to the Baptistery. In front of the main facade, you’ll see the famous golden gates called Gates of Paradise. They were designed by Lorenzo Ghibertis and are nick-named by Michelangelo. The original ones are fully restored and housed in Duomo museum. The Baptistery is lined with ancient Roman pillars of gray granite. It used to be part of the ancient Roman forum.

The Uffizi Gallery is a major tourist destination in Florence. It preserves the world’s largest collection of Italian medieval and renaissance art. The museum is one of the top three attractions in Italy. It is a popular place to visit.

The Accademia is the most visited museum in Florence. Visitors come to see the world’s famous sculpture, Michelangelo’s “David”. The statue is considered the embodiment of masculine beauty, a Calvin Klein–type model of physical perfection. The statue was commissioned by the Florentine government for the cathedral but was rejected because he was deemed too beautiful for such an exalted position.

Accademia is an art museum located in Florence, Italy. It was founded by Napoleon Bonaparte in 1807. It is open daily except on Mondays. There is a long waiting list for tickets. To get into the museum, you need to book your place ahead of time. This is done online or by phone. Tickets go fast, so make sure you book early.

The museum is an amazing place to see art. It’s located near the Accademia and is free to enter. You’ll be amazed by the beauty of the architecture and paintings inside.

San Marco is an extraordinary decorative compound, one of the unique things to do in Florence, Italy. It’s a rare chance to see early renaissance masterpieces in situ. The painting Fra Angelico’s Annunciation is another beautiful Annunciation. You can admire art in its original location and understand how modern audiences experience it. This simply isn’t the case at the Ufizzi or almost any other museums in Europe.

The monastery is a perfect example of Italian architecture and art. It was built by the Medicis, who were rich bankers. It was designed by Michelozzo, an amazing architect. It was decorated by Fra Angelico, a brilliant painter. The friar even lived there.

The Palazzo Pitti is the most famous palace in Florence. It was built in 1452 as a residence for the Medici family. The Medicis were the rulers of Florence during the Renaissance. The palazzo contains many paintings and sculptures. It also holds many other art pieces, including porcelain, silverware, and costumes.

Yesterday, I over did it. I made it a full day, staying on the move from dawn until after dark. It was incredible and humbling. Seeing such historic locations was very moving and made you have that feeling of insignificance you get when you look at the vastness of space.

Today I planned to spend time in the local countryside and at a few local wineries just enjoying the local culture, wine, food, and views.

There are local wineries here down virtually every road you care to travel. On most local roads you will find several. The longer the road the more you often find.

I spent a day tasting wines, meeting the amazing owners or managers, and tasting local cheeses, and food. I eventually stumbled on to an amazing local restaurant Ristorante trattoria la botteghina. Their website is down so enjoy this local travelers review instead.

This restaurant was recommended to me by my local host. I tried it on the second night of my stay in Chianni. The atmosphere was warm, cozy, and classy. It had great old world charm and hospitality. My server only spoke Italian and I had difficulty making out the full menu. I received some assistance from a gentleman at the next table who was dining with his family. They invited me to join them at their table. We had great conversation during dinner. I ordered two different wild boar dishes one with pasta and one that was more like a stew. It was fabulously tasty. Paired with a local red wine made just up the road I experience true Tuscan cuisine. For dessert I had the tiramisu which rounded out the evening perfectly. I enjoyed it so much that I went back a few days later for lunch. I had to try the goat! I would certainly recommend this restaurant to anyone visiting Tuscany.

I think even though my visit to Florence was astounding I almost liked this day as much. If I had real wealth retiring somewhere those lovely would be on my list.

If you want to see Florence and then spent time in a amazing wine region book this resort through TZort.