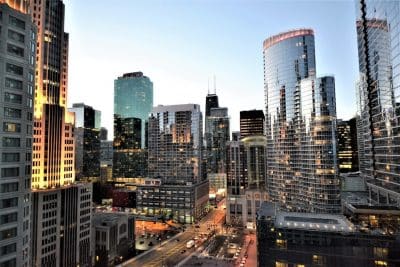 Hilton Grand Vacations Chicago Downtown/Magnificent Mile. Chicago has a lot to offer the vacationer and traveler. The food, entertainment, and historic sites are legendary.

My trip started with a flight directly into Chicago. Since Chicago is an airline hub, location flights here are often direct and cheaper than many other locations, you might go to. Sometimes you can even save a good portion by booking a flight somewhere that uses Chicago as the connecting location, then just not taking your connecting flight. I know that sounds , but I did not create the airlines pricing structure. This hidden discounted flight trick is something you can use for any major hub airport that has a number of connecting flights. Think about Charlotte, Atlanta, Chicago, LAX, and Denver as examples of this.

It can be hard to find these deals, but if you check major locations, that often get discounted flight prices from your area, you can find one. It turned out on this trip I was able to find nonstop flights on a round trip for under $300, so I did not look for more interesting ways to book a deal. I was happy with that. It is just something to keep in mind.

My flight was a piece of cake and we arrived on time. I had booked a flight time that had me landing just after check in time at the resort, so everything seemed to work a bit like a well-oiled machine. I chose to use a car service instead of renting since I would be staying in town. I did not want to drive. Also, Chicago has a reputation, and I did not want to be driving and make a wrong turn and end up in a bad area. Even in a city that has as much negative press as Chicago, the nicer parts of town are still very safe.

On the short trip from the airport, I talked to my driver and asked a ton of questions about his favorite things to do, and what he would recommend seeing on the trip. I already had some ideas in mind, but he provided several more that I could check into.

Checking in to the resort was a breeze and the rooms here you book through Tzort are 1 bedroom suites. They are 600sq ft or so varying some based on the location. They all have king-size beds and offer sleeper sofas. If you are with the, family that is a nice option for the kids.

The first thing that will grab your attention are the skyline views from your room. The views of the city are impressive. The look and finish of the rooms is top notch and meets and exceeds the Hilton’s high standards. This resort has a very modern feel to it. Before this, the last Hilton location I had stayed at had a more beach appeal, which made sense given its location. This seemed to fit well into the Chicago market and area.

Wright was the pioneer of what comes to be known as the Prairie school of architecture. He also developed the concept of a Usonian house in Broadacre City, a vision for urban planning in America. He designed original and innovative office buildings, churches, schools, skylines, hotels, museums, etc. Wright designed interiors including leaded glass windows, flooring, furniture, and even tableware. He wrote several books and lectured widely throughout the US and Europe. He was recognized in 1991 by AIA as “the greatest American Architect of all time”. In 2020, a selection of his works became a listed UNESCO World Heritage Site.

Frank Lloyd Wright designed some of the most famous houses in America. He created a unique style of architecture that reflected nature and used innovative materials and techniques. He was very interested in interior design and made furniture and stained glass windows as part of his designs. His most famous works include the Solomon R. Guggenheim museum in New York, Fallingwater in Pennsylvania, and the Robie House in Chicago. I have visited the Guggenheim and also been inside Falling Waters on a tour. This was the first time I was able to see one of his other properties in person. It was a real treat to do so.

Next on my list was going on a guided gangster tour. That is, before going to meet some real people from that life. More on that in a minute.

We proudly host a 2-hour, 1.5-mile walking guided tour that explores the gangsters and ghosts of Chicago’s past in the area of “The Loop.” Known as the vice district during the 1920s and 30s shady partying, deal-making, and threats, riddled with speakeasy saloons, secret underground tunnels used by bootleggers, and the famous Al Capone, The Loop is where the understanding and depiction of the 20th century gangster began.

Guests will have the rare opportunity to visit these heralded haunted locations and old crime scenes where it all went down 100-years ago.

Hosted by historians, it is not a theatrical guided tour; rather, the stories are told in a more intimate, historical setting that really paints a picture of guests in Chicago’s past. Spooky, real tales of the ghosts and gangsters of Chicago’s street will be shared along the tour route as the group stops at each famous location.

Family friendly and accommodating in nature, the tour makes frequent stops with a refreshment and restroom break.

For me, this was an excuse to walk and get moving some, and to wear my most comfortable Rockport for walking. The tour was good, but now I was going to pull a connection and go to the west side of Chicago for a bit of the real thing.

There is a small restaurant still owned by the guys, or fellas. While not what it once was for a little Italian restaurant in a rough area of town, nothing happens around this old spot. No cars get messed with, no shootings on the block, not even a pick pocket. It is an old school peaceful. Around this spot is rough and not a nice part of town, but I went as a guest of a friend who is in no way involved in that world, but he is friendly with some of the current guys. Close enough to get us a great table and access to one of the guys for a while to have a drink and listen to old stories.

These are the guys that know the secrets that they heard from their fathers or grandfathers about the Kennedy Presidential Election, and later major happenings. These days they all come out as amazing stories of a kind of world most only see in the movies, and are happy that is the limit of their exposure. It was interesting to hear things while not firsthand at least in the same booth that the fellas sat at, possibly making plans for major efforts over the years.

Another spot that had a much more public reputation was purchased and has closed down as a restaurant Horwath’s Restaurant was a known mob hangout and even a favorite local hang out in the 70s and 80s. It was purchased in 2003 and later closed. Where I was is still open and smaller with a much more quiet reputation. It was most interesting not for the food but for the stories.

I started today with a good breakfast on site. I had pancakes, eggs, sausage, basically anything together that I thought would taste good and later absorb a little alcohol. I was about to embark on a journey into booze. Chicago has a long history of brewing and distilleries, although most notably for the illegal booze during the prohibition, they still have a reputation for making alcohol. So, I thought I would lean in on this tour for the day.

If you do the brewery tour, you can go on a bus that is shaped like a giant beer barrel and with my love for all things touristy and kind of hokier I was all in.

The resurgence of craft beer is upon us! As you’re guided on this all-inclusive tour to taste samples at three breweries and tour one brewing production facility, enjoy the distinctive qualities of Chicago craft brewing while reveling in the artistic triumphs of this charming and historic city. This full-bodied voyage will indeed leave your palette pleased!

There’s no better way to travel from brewery to brewery than in a Prohibition-era styled barrel bus! Step on the bus through the speakeasy style vertical door to start your one of a kind Chicago Brewery Tour.

Each brewery has its own unique qualities. As you stop at some large and small facilities, you can get the sense of what it was like to step into a brewery back before Prohibition. You will receive samples of craft beer at each of the three breweries and tour one of the production facilities. Enjoy approximately 45-55 ounces of different flavors of craft beer along the entire tour. On the production facility tour, learn the step-by-step procedures of brewing and the science behind the process.

I was happy to test the possibility of breaking the seal, then getting back on a bus as a test of my will. Though those tests of a kind 50+ are harder than they were at 30 for sure.

The theme of the bus was fun. The crowd of ready and willing brewery taste testers and visitors was a blast. I think more than half of the bus was full on my trip and most were fellow travelers along with a few college-age kids that must have been going to grad school to have the income (or it was mom and dads, some people live differently). The tour is about 3.5 hours and offers a good chance to drink, have fun and mingle with your tour group. I was the oldest in the group, so instantly adopted by some as their designated story teller and beer guide alternate.

The tour guides were very knowledgeable and fun and the staff we interacted with on the tours also knew their business well. I have made craft brews at home through several methods over the years. Now I prefer to distill versus home brew, but much of the steps is similar.

This same group also does distillery and winery tours, as well as river walks.

If you want to learn more about the windy city firsthand, I strongly recommend using this Hilton Grand Vacations resort as your launchpad to the area. Just make sure you book through Tzort.