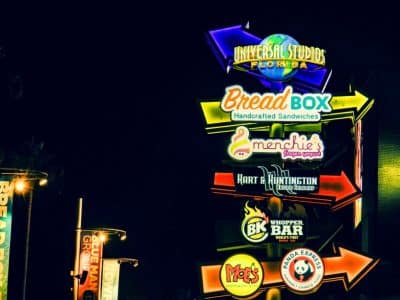 Holiday Inn Club Vacations at Orange Lake Resort is in Orlando, FL, close to Disney. So close you could likely throw a football and it would reach part of the parks.

Video by Florida and Beyond

I drove down as I often like to do. I travel down interstate 95 and stop for the night either in South Carolina or if I feel good, I will drive to Jacksonville, Florida and stay near the airport there at an affordable hotel just for the night.

This rest allows me to start to have fun the day I arrive versus just recover all night at the resort. A 12 hour drive is a lot when you are 50+ it was nothing when I was younger.

This resort is giant and well thought out. My room was a 1 bedroom king, but they offer suites up to 3 bedroom to comfortable accommodate most families. This means the grandparents can come along, and all the adults can have a room as well as the kids.

I told a friend about my trip and they were shocked that I can travel solo and enjoy myself, much less focus to write and share my experiences. I tried to explain how I am a creature of habit. I also offered to take them along if they wanted to drop things and just hit the road with me in 2 days. Well, as normal, my friend had to work, and I took off on this trip solo. Rest assured, I enjoy the company of a friend or a special someone if I am dating at the time. I also love to take a family member but often I am getting the accommodations at odd times with last-minute cancelations and the like. So, this makes things harder to plan and get your ducks in a row with other people.

I also have always enjoyed doing things my own way by myself. Maybe it goes back to the early years when I would play with my army men for hours as a child. On trips with my family, I would find a spot in the car and set up my army men for great and small scale battles. These were before the days of seat belts. Modern parents would be , but I played often in the back of a station wagon, or on a backseat without any safety device as our family moved on down the road at 65mph. Crazy days, but I think that and my love of films were the foundation of me becoming a person OK with doing things solo.

This trip after staying in Jacksonville for the night, I woke to a sad continental breakfast that should not have been free. They should have paid you to eat it. But I did get the version of juice they offered and those hockey puck eggs with a bowl of cereal.

I got on the road and made it to Orlando and the area of the resort early. Too early to check in and too late to go to a park for the day to make the most of it. So, I instead headed for Old Town at 5770 W Irlo Bronson Memorial Hwy, Kissimmee, FL 34746. This is a themed shopping and dining area that is like a step back in time.

The entire 18 acre site is focused on fun with shops, great restaurants, and the rides all themed like a classic Florida town of older, simpler days.

After a full afternoon, I went to check in at the resort and get set up for the next few days. My suite was a 1 bedroom king and one that offered everything I needed to relax and come back to after days of adventure.

Universal Studios Orlando is the world’s second-largest tourist attraction behind Disney World. For a day trip, I recommend getting a park pass for a few days so you can explore all the theme parks. Universal Studios is home to the famous rides, including Jurassic Park, Back to the Future, and Transformers. Now it also offers all things Harry Potter, and that is a major attraction for the movie and book fans.

If you want to experience a real wizarding world, you need to visit Universal Studios. The new Wizarding World of Harry Potter attraction is located in the middle of Universal Islands of Adventure. It is a themed land filled with all the elements that have made Harry Potter so popular around the world. This includes the Hogwarts Express train that takes you to the castle. There, you will find the Diagon Alley shopping area. This is where you can buy magic wands and other Potter paraphernalia.

My plan was simple today: ride and see as much as I could starting in Harry Potter’s Diagon Alley. Here, you can dine, shop, and experience the thrilling new ride, Harry Potter and the Escape from Gringotts™. Plus, with a Park-to-Park admission ticket, you can travel to the Hogwarts™ Express to The Wizarding World of Harry Potter™–Hogsmeade™ in the Islands of Adventure®.

Be sure to check out Hollywood Rip Ride Rockit®, a rollercoaster where you pick the music that plays while you ride. Don’t miss TRANSFORMERS: The Ride–3D, an amazing ride experience. I don’t know about you, but I love to laugh. And Universal Studios® offers some hilarious attractions. You can join Gru, his daughters, and the mischievous Minions on the 3-D ride, Despicable Me Minion Mayhem®.

For those who prefer shows over rides, Universal Studios® offers an array of live entertainment. Make a reservation to enjoy Universal’s Superstar Character Breakfast featuring characters such as Nickelodeon’s SpongeBob SquarePants and Dora and Diego. Then, see them again later in the day as Universal’s Superstar Parade® takes to the streets. When dinnertime rolls around, you’ll find plenty of choices, including Universal’s Cinematic Spectacular® dining experience.

Make a reservation and enjoy a great dinner and dessert followed by preferred seating for Universal’s dazzling night time show, which takes you through a hundred years of Universal’s greatest movie moments. Want a great tip? Purchase Universal Express℠ and you can skip the regular lines at most rides and attractions. It’s a terrific way to make the most of your time in the park.

Many years ago now I happened to go on vacation the same week that Universal opened their doors. I had driven down to Florida with the intent to go to Disney, but when I heard the new park was opening, I had to check it out. The first section that opened was Universal’s main park. Island of Adventures at this point was not even designs on paper. The restaurant that was there is still there and still the best. Finnegan’s is an Irish themed bar that offers its spin on traditional dishes. Here you do not need a reservation most of the year, but during peak times you may wait for a table.

Others that have caught the Harry Potter Bug may want to eat at one of the themes of Harry Potter restaurants where it is all about the atmosphere over the food. Regardless of where you choose to eat, you must try the Butter Beer from Harry Potter fame. If Slurpee and Cream Soda had a sugar baby, it would be this. My guess is that if you let kids have one, their sugar quota would be filled for 2 days off of 1.

To me they are very tasty, and worth a try.

One tip for times when things are busy. It can be worth getting the express pass during peak weeks at the park, like spring break, or those top summer weeks. Most of the year, you do not need them, but they are a treat when it is busy. For select rides you can go almost to the front of the line with a preferred shorter line. This feature is expensive by any measure. Either basically $80 for one time per ride or $120 for an unlimited amount of rides. This is per day, so that option, while nice, is costly.

Day Three Back To Universal

It does not matter which major theme park you choose. On this trip for me, it was Universal. In the, past I have chosen Disney. Each one will take days to see even most things. For Universal at a minimum, I would plan on a day for each park. While skipping the water park because they are fun but not as impressive as the theme parks at either location.

Universal has so many great rides that if you are a ride person, you may prefer Universal.

Time to do some rides. Jurassic Park River Adventure is a great water ride. If it is a hot, day you can visit this to cool off since you will most likely get wet. Think a giant floom like ride with the big splash at the end and you have the picture.

You have to have a two park pass to ride because the express literally takes you from one Harry Potter area to another between both theme parks of Universal. It is a great ride for Potter fans and gives you good access to both parks.

Harry Potter and the Escape from Gringotts™ is a ride you will want to take more than once as a fan because there are so many scenes to catch things in as you ride. It is a 3D+ or 4D experience. Lots of sensory fun and games go on in this ride.

Like most rides in the park, you need to be 42 inches or taller and if your child is over 42 inches but under 48 they will need an adult with them.

One exception is Despicable Me Minion Mayhem™ where the size goes down to 40 inches in height to try to let more young ones in. Still, the under 48 inch adult rule applies. Young kids love this ride, especially those who love to laugh or giggle alone with a Minion.

I spent most of my time going from ride to ride, only slowing down for a resupply of liquid energy with too many Butter Beers. Then, as my sugar rush energy ran down, I watched some of the shows.

The Blues Brothers® Show is on the street, but the impersonators do a great job and really get into the act. The music is good and their energy is high.

The Bourne Stuntacular is a stunt show with live action that reminds me of the Indiana Jones themed show. It was well done and a good rest to sit down and watch the show.

Like Disney, Universal offers character encounters too. Never something fun for the parents, but young kids love the characters. You can meet many of the Marvel heroes, as well as classic comic characters. I like that the kids can meet Dr. Seuss. These are all in the Islands of Adventure and Shrek, Raptors, and Transformers are in the Universal park.

Enjoying a trip to Universal or Disney to me depends in part on your base of operations. I really like the location and features of this resort at Holiday Inn Club Vacations at Orange Lake Resort as the base of my park fun in Orlando and you will too.

Just book with Tzort for the best pricing.