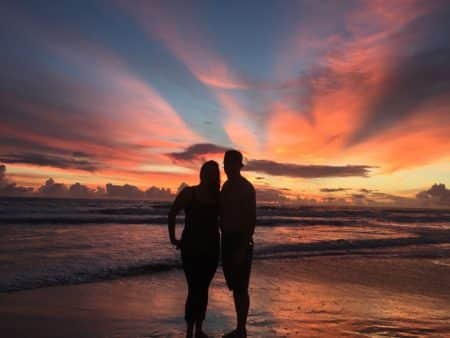 Casa Del Mar Beach Resort is in sunny Florida in the Ormond Beach area. Ormond Beach, Florida is a lovely small beach town. With a population of over 38,000 and growing.

Ormond Beach is just above Daytona Beach to the north. Many of the activities will also be related to Daytona that are not there on the beach activities.

Most of the time, I still chose to drive down to Florida. Perhaps I still drive because I am used to the trip, or because these days it is just cheaper and less involved all around. Rental cars at the moment are not cheap, so taking your own car has its benefits.

Driving down I95, it is fairly fast at around 10 hours. Since some areas of the interstate are 75MPH speed limit areas, those miles seem to flash by on the trip. I will admit that I am traveling 5MPH over the posted speed. Most places I go on the interstate if the weather and visibility are good. 75-80MPH just seems so much faster during travel than the slow poke 55MPH.

This trip down was easy and I normally would stop at say Jacksonville on the way down, but I planned this time to try to just drive through and if I got tired stop for a quick nap at a rest stop. I made it instead without the nap but ready to check in and get one at the resort when I arrived.

They had my room ready, and it was a nice ocean view room as well. I looked at the ocean, turned down the AC, and pitched my bags to the floor and went in for a nap.

Maybe 2 hours later my stomach woke me saying “hey big guy did you forget me?”

Well, luckily you do not have to call to send help for the writer. It did not actually speak, but I knew instantly what the tummy rumble meant. “Feed me Seymore, feed me.”

Close to the resort, I found Tipsy Taco which offers just what the name implies tacos and drinks and that sounded just right for me. The meal was good and what I was a little shocked by was a menu item I did not expect to see at a taco place and that was the parmesan crab dip. While not a place that might describe a menu item like this, this is how I would list this appetizer.

“A well-balanced blend of aged parmesan cheese and fresh crab, in a dip that must be served with our fresh made authentic corn chips, to enjoy.”

I do not know if they used aged parmesan or not, but it sure tasted like it.

I washed it down with we will say for the record two margaritas. (It is really close to the resort). They had Cabo Wabo, behind the bar and I just like that Tequila.

I had a 1-bedroom villa at the resort but they also offer 2-bedroom villas as well. All are good sized especially for on the ocean. Spacious enough that in some resort locations the rooms would be $1K night accommodation. Thanks to TZort, these were much less, just check the booking yourself, and see.

I woke early since I did hit the hay fairly early after my drinks and tacos outing last night. I was not up for the sunrise, but it was not long afterwards.

I put on some sun block so I did not do my impression of a cooked lobster and headed for the beach. Here the beach is steps. Not a block or two but literally steps away.

Most people would likely be happy with the view from the pool area just above, but for me, it was important to get my toes into the sand and look at the waves without anything in my view. Today the surf was calm, just little 2-3ft waves coming in. Not a day that surfers would love, but I looked forward to going in for a swim.

I was here in September, so the water is still nice and warm and the weather is warm too. In Virginia in September, you will still have some warm days but the water has already started to drop in temp from summer some.

The beach here is very nice. It is not as wide as Daytona, which is just a little south but still wider than many beaches you might visit.

If you have an ocean view room, your balcony is off of the bedroom and the window style AC (hotel version) is near the floor on the other side of the room from the door to the balcony. These are the same kind of units you might see at a Red Roof Inn or another hotel for the AC. A little louder than the Mini-Split systems, some places are updating too, but still modern and very effective at cooling the room. Most places I would enjoy the slightly louder unit to drown out any outside noise. Here with the ocean, I hope it is cool enough to turn it off and open the balcony door at night one night while I am here. I just love the smell of the ocean and the sound of the waves.

After the entire morning on the beach, I headed back to the room for something to drink and a shower before I went out for lunch. Your room has a little kitchen so I could have cooked, but I was feeling lazy and chill, so I just went out instead.

Just after you reach the Tipsy Taco, there is another place called Demetri’s Bar, Deck, and Grill. This is where I landed for lunch. It was good, and the location is nice so it turned from lunch into a drinking lunch, then a lite dinner too.

They do a mean pizza here that is brick oven cooked. They mention that the bricks were brought from the owner’s home in Greece and are over 200 years old, which is a neat thought.

It is a popular spot for locals and seems to have a dedicated crowd. Why not? The location is nice, food is great, and the service was friendly.

I broke with my own typical drink choice somewhere like this (beer) and instead tried their sangria and really enjoyed it. I did not ask questions because I feared it might be just something they buy instead of make and I was enjoying it so much I did not want to spoil the moment. Sounds silly, but it is real. Ultimately, after having one, I ordered a pitcher. Then slowly worked on it with my lunch, and then the start of my second meal.

I had the pizza, which was great, but also ordered a burger to go before I left because they too looked good.

Having had too much to drink to safely drive around town. I went back to the resort to settle in by the pool for a while, then back to the room with my balcony door open to hear the waves and ocean for the night.

I woke with sunrise thanks to the open door to the balcony letting the sun in, and a nice couple laughing on the beach together. Neither the light nor the sound bothered me. They were both welcomed as a start to my day.

While I would be happy with the full day just hanging on the beach again here. I did want to get out and see the area more and even go down to see a few places in Daytona I like.

I went to a new spot for me for breakfast called the Peach Valley Café. I will admit the name drew me in for a meal. I love North Carolina and Georgia Peaches when they are in season each year. Fresh peaches still warm from the sun are one of the most amazing things you will ever eat. Fresh, they taste like more than a fruit, more like dessert.

Breakfast here was served a little slow but likely just because they were busy. The food was good and my waitress was a kind young lady.

I had blue berry pancakes and was a happy man. Strange that they did not have peach pancakes even if they used canned peaches when not in season that would work for the namesake. Who knows, maybe they are purist peach fans like me at heart.

When in the area if you love fishing, nature trails, or water activities, do look into going to Tomoka state park nearby. The Park is open from 8AM to sundown and is only $5 per car to enter. So, it is a great value.

I paint a little so I wanted to go to the Ocean Art Gallery next. There were several good local artists here, including two that do water color that had some very nice work. Sometimes a talented water color painter can get almost oil quality results but with that nice softer feel of water color. That was some of the ocean paintings that I saw here.

The gallery also had a silversmith and a photographer at the time as well. Photography is underrated by many, but the eye of a talented photographer can create amazing images for lasting memories.

Now you could certainly visit Daytona while in town, and I have done that several times before. It is fun, especially for race fans. The track and museum make for a nice visit. Planning well, you may also be able to catch a race while you are in town.

If you want to travel like a King or Queen and stay right on the beach, just make sure you book this resort through TZort.