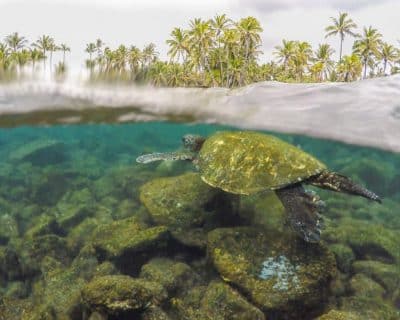 Any journey to Hawaii will start with a flight. The only exception being those who take a cruise ship, but it is likely the least favorite cruise most will go on because it takes several days at sea and can be a rough trip much of the year.

So, for over 90% of travelers, flights are where it all begins. This is my 6th trip the islands, and it is more based on the love of the area than anything else. The flights alone are expensive so, most folks have to plan for this big vacation.

This resort is impressive. One thing is location, location, location. The rooms here are 1 bedroom suites and they are a nice size: 785 sq. ft.
Spacious 1-bedroom/1-bathroom suites with a balcony feature a primary bedroom with a king-size bed or two double beds, and a bathroom with a standard shower/tub combination. Suites also include a generous living room with a separate dining area, TV with cable, PlayStation 3, and queen-size sleeper sofa as well as a fully equipped kitchen.

My flight got in after check in time but not too late so I was able to get situated then go eat some dinner and catch the sunset. I went to Uncle Bo’s for dinner and the food was great.

Climb aloha tower for unparalleled views of the harbor it’s easy to mistake this lighthouse for a clock tower but it’s actually one of Honolulu’s most prominent and distinct landmarks it was built almost a century ago in 1926 to celebrate Honolulu’s status as a major port it looms over pier nine looking out over the coastal skyline and Honolulu’s harbor we recommend climbing to the top for views that will leave you speechless it’s also worth a visit just to admire its construction down below at ground level you’ll find the aloha tower marketplace which features restaurants event space and many shops and boutiques.

Waikiki beach no one goes to Honolulu without going to the beach and Waikiki beach is definitely worth checking out we recommend setting aside a day or two of your itinerary to soak up the sun here the emerald blue water and perpetually sunny weather are inviting enough but we should let you know it can get quite crowded especially during the sunny months if you’re looking for a beach with a little more seclusion you can find plenty of other top-tier beaches throughout Oahu.

Waikiki is a 3.4 square mile neighborhood in Honolulu, the capital of Hawaii. It’s on the island of Oahu. Oahu, whose name means the “gathering place”. Waikiki beach this two mile beach was once reserved for Hawaiian royalty but is now one of the most famous beaches in Hawaii and the world enjoy every water sport you can think of including snorkeling sailing surfing and stand-up boarding window shop on the Kalakaua boulevard take your picture by the statue of duke Kahanamoku an Olympic champion known as the father of surfing.

This is the beach you have seen in TV shows and Movies your entire life. So, it feels like in my mind’s eye this beach is the most famous in the world. I remember the great shows that have had scenes here that I saw early in my life when travel was not an option from a financial standpoint.

Take a tour of pearl harbor and the USS Arizona memorial December 7 1941 was a dark day for the island of Oahu and the U.S. as a whole the USS Arizona memorial does a great job honoring those who laid down their lives for their nation on that fateful day. While it’s free to visit and they offer a 75-minute educational program which is also highly recommended, only 1300 guests are admitted each day so show up early to secure a spot. The parking lot will fill up quickly and those tickets run out fast. Tickets are first come first serve, but if you show up early in the morning, you’ll have plenty of time after the educational program to explore everything else pearl harbor has to offer.

If you don’t mind shelling out a few extra bucks, take a tour of the other ships at pearl Harbor. we recommend also checking out the Pacific aviation museum and the battleship Missouri museum.

Next visit the official residence of the Hawaiian monarchy in 1882 Iolani palace was built for King Kalakaua and his family it was restored in 1969 and opened to the public in 78 and ever since it’s been providing visitors with an unforgettable and free experience if you’re interested in learning a little about Hawaii’s distinctive history heritage you won’t regret paying this incredible locale a visit.

After those locations I wanted to see the volcanos once more and at night time it is best because the lava is very impressive at night.

Hawaii volcanoes national park despite being referred to locally as the volcano, this park is actually home to not one but two volcanoes.

The must-see for most people is kilauea in 2018. This usually pretty active volcano became more active than usual and its lava flows destroyed homes and even entire villages. Today the volcano has calmed down a bit, and it’s now safe once again to explore the park’s scenic roads, trails and geological wonders. If you’re lucky, you might even catch a glimpse of what everyone hopes to see: a fiery otherworldly molten lava flow, especially at night.

Want your own dream Hawaii vacation? Book through Tzort.