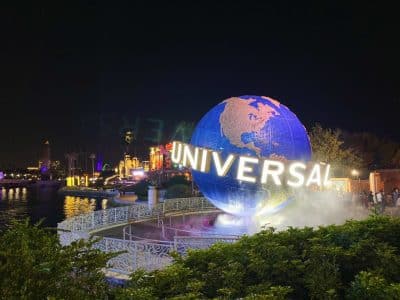 Las Palmeras by Hilton Grand Vacations is a top tier Orlando resort. Orlando is an amazing town and one of the very best vacation spots on Earth.

On this trip I want to visit Universal and try to see it all in 3 days which is a bit insane given all there is to do and see, but it is a challenge I accept.

On this trip I am just moving over from the resort at Sea World so this made the travel a piece of cake. It almost feels like a staycation but here in Orlando.

The address of the resort puts it right on Universal Boulevard. 9501 Universal Blvd, Orlando, FL 32819

I will go to Universal first today and then check in late, when I am done with the park for the day. This location is amazing. Especially if you appreciate Universal because it is hard to stay closer to the parks unless you stay on site.

The rooms here offer all you expect from the Hilton Grand Vacations brand. The accommodations offer all of these features.

My first day was spent here on all things in the original park. Here there are 14 active rides, many shows, and experiences and some great options for the kids.

Tomorrow will be my day to hit all things Harry Potter hard and kind of immerse myself in that content. It is active in the two major parks and you can even transfer from one park to the other on the Harry Potter train from the tracks at 9 3/4.

Make sure to check the website for the latest deals on passes and different upgrades. The parks are still offering some great seasonal deals, like 2 days free when you buy 2 park passes for 3 days, and more.

You can also rock out at the Hollywood Rip Ride Rockit roller coaster, or race through New York at the Late Night with Jimmy Fallon show. At Universal Studios, there’s a whole world full of magic, but if you’re looking for some real thrills, try the King’s Cross station, where you can board the Hogwarts Express, which takes you straight to Hogsmeade.

These starter tickets are designed for visitors who want to see Universal Studios Florida, Universal Islands of Adventure and Universal’s Volcano Bay. Visitors can choose to visit any of these parks on any given day. Multiple days of admission are possible if you visit more than one park.

Travel tip: when visiting the wizarding world, make sure to get a park-to-Park ticket. You can’t ride the magical train without one.

When you buy Universal Express Access, you get to skip regular lines at some of your favorite rides and shows. You also get to ride them faster than normal.

There are many kinds of rides at Universal Studios. Some of them are scary, some are funny, and others are thrilling. Most of them are fun for everyone.

This ride is scary because there are lots of things that could happen to you. You might fall off the ride or get stuck somewhere. There are also some scary scenes in the dark. Your heart rate goes up when you see scary stuff.

The Autobots and Decepticons are fighting over the AllSpark. This is a thrilling action adventure story. You get to be part of this battle.

Height restrictions: 40 inches (101 cm). Children 40-47 inches (101-116 cm) must be accompanied. Hidden from the Muggle’s, Diagon Alley continues its centuries old activities for industrious witches or wizards. You’ll find the popular attractions such as Gringehtts Money Exchange, as well asthe Harry Potter and the Escape From Gringott’s. There’s much more than what’s found inside Universal Studios Florida. At this time, Universal Studios’ Superstar Parade will not be running during this phase of reopening. However, guests can see some of the parade characters throughout Universal Studios during daytime hours. Nighttime shows such us Universal’s Cinematic Celebration won’t be available at this time..

A VIP tour of Universal Studios Florida and Islands of Adventure. Includes priority front-of-the line access, exclusive behind-the-scenes tours, complimentary valet parking and reserved seating at shows. Includes lunch at one of the 50 plus restaurants.

Throughout the year, Universal offers unique experiences for the VIP audience. These are costly and should really only be considered by those with deep pockets for fun and exclusivity.

I think the guided VIP tours are something for those who do not mind just spending money for convenience. Like the hands on service offered at Disney parks, these experiences and services have an ever rising price tag, but they are less costly at Universal than Disney.

Day Two back for Potter

I enjoy going to and from the main parks on the Hogsmeade Express. It really kicks the entire Potter experience into overdrive mentally.

In the main park you can visit Diagon Alley and the focus here beyond rides, and food. To tons of shopping, much like Diagon Alley in the movies and books. Parents should have a plan here, at least if they still plan to be able to afford college for your child. The items have the usual markup here, but there is just so much.

If you want to, you can order wands for the kids ahead of time and bring them on vacation with you and save a small fortune. The only thing is there is not a way to influence the wand sorting outcome, so that might be a disconnect.

For that sugar rush to get your day going, it is hard not to start off with a Butter Beer. After 2 hours of looking around and visiting everything here, I was ready for something to eat. For lunch I went to Finnegan’s, which is a full-service restaurant and has been open since the very early days of the park. The food is great, and the beer is perfect. It really lets you have fun and take a break from the heat outside. I had the bangers and mash and several beers and even with all the fun outside, a part of me did not want to leave my spot here.

I pushed myself away from the bar and headed back out to be a kid again. Minutes later, I was on my next ride. Escape from Gringotts it is a neat ride that is part everything coaster, 4D ride, and so much more. The technology is impressive even for a nerd like me.

With a ton of walking, a few adults beverages, and two meals under my belt, I headed back to the resort for some rest.

I think your final day in a top tier amusement park is a mix of trying to see the things you wanted to see but have not yet, and making sure you do your favorite things again.

For myself I wanted to repeat most of the rides from day one, and I wanted to see Skull Island, the Reign of Kong despite having seen all the king kong movies over the years, even the early bad ones. I had not made it to this ride yet. It was fun and I would certainly add it to your list.

Next another first was the Amazing Spider Man it is another 3D/4D motion, ride but again well done and tons of fun.

All together, the Islands of Adventure offer 19 rides, tons of shows, and a great deal to see. I was too wimpy to do the Velociraptor coaster but I hear it is great.

During the peak summer months, you may well want to go to Volcano Bay for the water fun in the hot Florida Sun. On this trip, I was entirely focused on the main theme parks over the waterpark.

I ended my day with the Fast and Furious Supercharged ride.