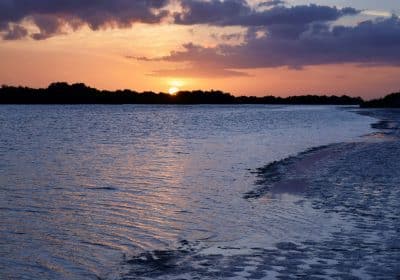 Sunset Cove Resort by Hilton is on Marco Island, FL. The largest developed island among what is called the 10,000 islands in Southwest Florida.

Day One Travel & Arrival at Sunset Cove Resort by Hilton

Until recently, my trips to Florida would begin with a drive down Interstate 95. I really enjoyed the drive, something about clearing my mind and light daydreaming on the way down about where I was going to be staying and the fun I would have.

But now I am hooked on the idea of flying down to southern Florida instead. The reason for the flip is the ease of it all. Flying down to Fort Myers or Miami makes life so easy for you when you are just getting away for a couple of days. If you are bringing the family down and live close enough, it may make sense to still do the drive. But for one, traveling this far by car is a financial mistake.

Do the math and the gas along at $5 a gal makes the flight a win, then if you stop on the way down in a hotel for a night, or just stop for meals, those add up too. Just on the way down, I saved more than enough to pay for the rental car for my trip, while still saving 15 hours of driving. To me, that is a win-win.

If you are driving down, I would pace yourself if it is over 12 hours and stop for the night on the way. Even with two drivers in the family, you are pushing the kids’ ability to go without sleep, and yours as well. Off season, the drive usually is free from most traffic, at least until you hit Florida, which seems to have a go all year feeling.

On this trip, I flew into Fort Myers (Southwest Florida International) which is a nice but smaller airport. It is also 1 hour closer than Miami International. When you book your flight there are 12 car rental companies at this airport. All the major names, then a few local providers as well. I use Enterprise the most, but this trip Hertz had a great deal I could not refuse on a car for the week. I would be staying 3 days at this resort, then 3 days at another, so the Hertz deal worked well for me. In short, it would likely cost me more in gas than the rental. I also have a credit card with great rental car coverage so I am able to safely waive the added insurance when combined with my own auto insurance coverage. You have to really read those coverage details closely, but I used to be a Property and Casualty Insurance Agent years ago, so reading the covered perils comes natural to me.

My flight arrived on time but there was a slight delay because at one point when the seat belt light came on, one guy was walking the plane and he was slightly injured. Folks, do not understand that turbulence can be a real thing, and violent at time. There were only a few bumps during the whole flight but one was like we were in a soda can being shaken by a 12-year-old setting someone up. That was when the guy was being foolish, ignoring the stewardess and likely broke an arm, and a rib. Hats off to the stewardesses. They handled him, and then his care until we landed like professionals.

I was going to get involved at one point since he would not sit down, but lucky for me before I took off my belt to help nature took him out. I think he will be fine, but we had to wait for some help to get him off the plane and clear first before unloading.

Once off the plane, I made my way to the rental car desk, checked out my car, and headed to the lot to get the car on the road. Next thing I was on the road to Marco Island, and it was a fairly short trip to the resort. The drive was about 50 minutes from rental car pickup to the resort itself on the Island. So, again, even with the delay for the foolish travelers’ medical care, I still saved about 14 hours of driving or more by flying here today.

In all my flights, that is the only time I have seen someone hurt on a flight, and it was his fault for ignoring the crew. I was glad he was OK, but also hoping he learned from his experience. Better to learn a hard lesson than to lose your life needlessly. I remember one of the infomercial guys died on a flight after hitting his head very hard during turbulence. So, sadly, it does happen and the seatbelts do save lives.

Above with this blog I have included a video made by another guest for your review. It shows a room here and many of the amenities. Worth review even if you feel you must turn the sound down because of the music.

Sunset Cove Resort by Hilton offers a great deal of comfort and at great rates through TZort. I love the full kitchen set up in my room and the size of these 3 bedroom suites or villas is impressive. I was staying in one that felt more like a full sized home than a vacation condo or resort villa. It was nearly 2,000 sq ft.

As the name implies, here, you are on a cove for the water view, instead of ocean but for the added space it is a welcome trade off. I was here solo on night one, but I do have friends coming over tomorrow that will spend time with me at this and the next resort. The resort provides a free beach shuttle and when those are run well, they are very nice to have. It sure beats trying to find beach parking in most resort towns and islands.

Once settled in my room and unpacked, I wanted to grab something to eat. Less than a block away was the Italian Deli, so I thought that would be a good spot for an early dinner. They serve great sandwiches, appetizers, and full entrees here. I tried their lasagna and was happy I had. I was light on sauce, but the flavor was excellent.

After then I went to the nearby Winn-Dixie to stock up on some groceries for the room since I would be entertaining. I grabbed breakfast items, snacks, and a few adult beverage options. If we did not drink it, all my friends live about 2 hours away and they could just take it home with them. I did not purchase a ton now since 3 days from now we would be moving to the next resort. No need to lug items from one resort to the next.

I like the Winn-Dixie chain we used to have these more near my home, but they closed out due to competition from several other providers in Virginia.

Staying on an island making your way to the beach is something you must do. After having some breakfast in our villa, we got a ride via the shuttle to the beach.

The South public beach access point was just South of the resort we would be staying at next. So, we walked from that point to the next resort just to have a peek and enjoy the beach for a while.

Even going on to the beach at a public access location, the beach was not very crowded. That surprised me since it was May so not prime season, but certainly getting there from a traveler point of view.

When I visit a beach, I am still like a kid in that I like to see some rough waves and the pound my way through them into the gulf or ocean. As a young man, I used to imagine that I was in a wrestling match of sorts with the waves. I would slam into them and feel the power of the water as I did. That little clash with nature amused me and still does till this day in some lessor measure of value.

I think my friends thought I was crazy at first glance. I mean, here is this older guy (who now qualifies for AARP and AMAC) jumping into waves and laughing softly while smiling ear to ear. With some things, I am still a very simply guy. One of them did manage to join in on the fun for a few waves and I think she saw what I enjoyed about it. It was a bit rough for someone who might weigh 120lbs soaking wet, so she did not last long and the wrestling waves dance.

A few more chuckles later, I met my friends on our beach towels and explained my thing with waves from childhood as best I could.

A full day on the beach doing the dances with waves thing, and some swimming and I was done. The batteries were empty and my back was telling me I had just fought a great battle against an unseen enemy. (For myself, I think it was time or early old age).

We headed back to the resort and made some dinner with what I had purchased the day before but intended just for snacks. It worked, however, and I was so tired that I was happy just staying in for the night.

There is a lot to do in the area near the resort, but yesterday was so fun on the beach that was all I wanted to do again once the sun was up high enough in the morning sky. This location at Sunset Cove Resort by Hilton is ideal for beach time fun.

It also did not hurt that both my friends looked nice in their bikinis. Again, I am a simple man. Give me the choice to see local sites or sit on the beach with two attractive gals in bikinis. I will probably choose the latter every time.

We left the beach for some lunch at the local Crazy Flamingo. It was a good American menu with a little something for everyone.

After the food and a few drinks, we returned to the resort villa to wind down the day into the night.

Get your own perfect Marco Island trip booked through TZort.