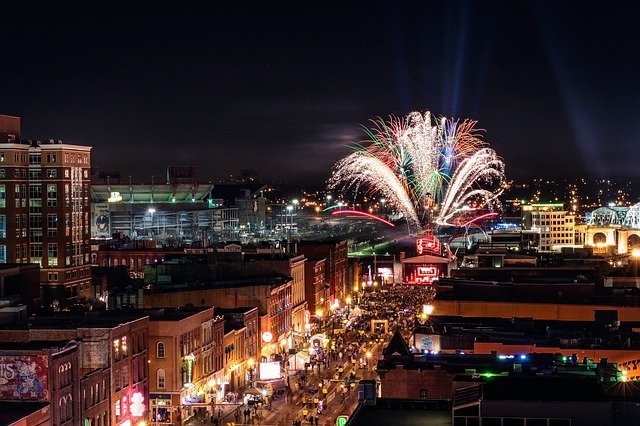 Nashville is an amazing town and for country music fans it is the center of the world. I looked forward to the resort and a trip to Nashville. The resort itself is within walking distance of Music City Center, and Bridgestone Arena. Just steps from the Country Music Hall of fame. In short, I would be going to the hot music and entertainment city of Nashville.

Travel to Nashville for me was an easy step. A day drive over the Western part of the Virginia until it meets the Tennessee border, then on to Nashville.

After my journey to the resort and an easy check-in I wanted to get some dinner. I headed for a local favorite the Oak Steakhouse. I ordered a 12oz fillet which when it arrived at the table you smelled its perfect cook scent. With that and a Cesar salad I was a happy man. Topped off with a few craft cocktails, I was nearing travel food heaven. The steakhouse was about 2 blocks away. City blocks that were basically the entire length of the Music Center complex. It was so nice to not have to worry about driving or getting a cab or Uber.

I enjoyed the feeling of being so close I had a 3rd and then a 4th cocktail. These were craft house made specials with great ingredients, so they were hard to stop enjoying.

Back to the resort while I was feeling no sense of pain, I walked off my 4th cocktail by giving myself a tour of the features of the resort itself.

Even though the pool and bar was very inviting I postponed my trip to the bar and pool for tomorrow afternoon or night so I could get up early in the morning and get an early start on the day. If I chose to have a few more tonight it would not be an early wake up.

The entire resort has a fresh active feeling. I felt like I was on a cruise ship with the carpets, pool areas and open spaces. I really liked the entire vibe.

My room after all was impressive as well. Here the rooms are all set as studios from 400-650sq feet.

I woke feeling fresh this morning thanks to stopping the adult beverages at a reasonable hour. When you are in your 20s you can do crazy things and hit the ground running the next day. Not so much when you qualify for AARP.

I wanted to get breakfast and somewhere that had southern cooking. I headed for a local breakfast hot spot called Milk and Honey given the name and their reviews I felt it has to be good. I had an omelet and a cinnamon roll that might make you cry it was so good. That and some OJ, and a milk and I was a happy man.

After breakfast that was fit for a king, I went to the Country Music Hall of Fame. I had driven to Milk and Honey then drove back to the resort and walked from there. The resort is so well located that for a great deal of the attractions downtown you are in walking distance.

If you look at the website you can get a firm grasp of the Hall of Fame. If you are a fan of music, you can even watch many videos before you trip on their website. I find doing things like that before my trips gets me all keyed up and excited more about my vacations.

The Hall of Fame even has some great online exhibits for those that can not make the trip that change fairly often. What you find in person is a much more in depth look in person at the people, sounds, and many items from these music legends. I have been to the Rock-N-Roll Hall of Fame and that is wonderful but I must say think this one is better organized and maintained.

I could have spent the entire day with these music legends and their collections. Instead, I spent maybe 4-5 hours, and all for less than $30 for the ticket. So, I think that was money well spent.

Nashville has amazing music and many things to see. The city also has amazing food. I felt it was time to eat again. It does not hurt my hunger doing all the walking as well.

Next, I went to a local hot spot for lunch called Monell’s this is modern southern food that is served family style. I felt kind of like a single guy going to a Japanese Hibachi place where you have to mix in for lunch with a family or two to have the full experience. Family style is where they just keep bringing bowl after bowl and plate after plate of great food to the table.

This would have been another great spot for breakfast. There are 3 locations in town depending on where your vacation has you in Nashville for the day. The menu for breakfast looks amazing, and lunch which I caught the tail end of was impressive.

For Saturday in addition to the fried chicken the meats of the day were Meatloaf & Pulled BBQ Pork, which is likely my ideal day here.

If you get a chance try this restaurant out, the food is just insanely good. The family style service makes it fast and convenient as well.

Next on my list today was to see the Andrew Jackson home and grounds. Ever since I heard about his exploits in history class in school I have been impressed with Andrew Jackson. Later when I needed to pass a test for history class, I had listened to Johnny Horton songs that seemed to spoon feed you the dates you needed for your tests, along with wonderful images of President Jackson’s actions throughout our nation’s history.

His life would be impressive for any person in history. You get to see and learn a great deal about this amazing former President, General, and even his years as an orphan in his youth.

I have been to several Presidential museums and homes. Again, this one is something special. Maybe it is something in the water but Tennessee does a wonderful job with museums and curating collections. I would encourage anyone who loves history, especially American History to spend part of a day on their vacation here. You will be amazed and impressed by his life, actions, and his sense of patriotism. I came away not just more informed but a full-on fan of this amazing man and his life actions for our nation.

Today I was going to visit the Jack Daniels distillery. I had booked a tour that includes a bus ride to and from the distillery, lunch and a few other things. I was going the bus tour mostly so I could enjoy the tasting and not worry about my own transportation.

These days I do not drink like I did when I was young. I mostly keep things to a very dull roar. However, for a few years Jack Daniels was my drink of choice. I do not remember what movie I got it from maybe the Shinning. But I line I often felt was amusing was saying to a bartender I would like a John Daniels and coke. When they attempted to correct me and say “Do you mean Jack Daniels sir?”, I would respond “When you known him like I do, you call him John Daniels.” Do not feel bad no one likes that little joke other than the bartender you catch with it. There is a reason I am not a stand-up comedian.

I took the Jack and Back Tour which offers the bush to and from, tour of the distillery with time in the tasting rooms, time for lunch in town, then the bus ride back. If you had a designated driver, you could very well skip the bus and fuss and just do this solo. But for me the bus made sense, and was cheaper than renting a car and driver. If you had a group, you might be able to rent a limo for less than the costs of the tickets for the group on the bus tour.

Now the tours of the distillery themselves are not cheap. So, this tour bus service is really not bad. But one thing to consider is that for the same price if you drive you can do their top tier distillery tour that includes lunch on site and is 3 hours in length.

It is hard not to leave with some bottles, or some other arrangement. You can even take steps to buy a barrel if you want to go all in. I love the brand but I would likely get a smaller barrel else ware versus going all in here at nearly 10K. But for the right person finishing off a man cave that might be just the thing.

I purchased a private barrel (small one) from another distillery some time back and I have about another 24 months before delivery. Even though that one is only about 5 liters I may pass some of it off via my will.

The Jack Daniels tour is interesting and fun, especially for fans. After my bus ride back, I was ready to shower, refresh and get back out to see more of the city. The entire trip was about 7 hours so it will be nighttime when I get back out on the town tonight.

How can you come to a city known for its music and not see some live performances?

When you are in Nashville one of the top locations is The Grand Old Opry. Almost every major country music legend has performed here. Some of the best still do. Tickets are not cheap since going here is a must for many, tickets start near $100 a go up. The price increases when you take advantage of many unique experiences as ticket upgrades. These are very neat if performers you love are playing because it means you will likely get to meet one or more of them.

You can also do backstage tours during the day time here before a show which can be interesting for real fans.

For myself musically I seem to go through seasons. For 6 months I will be in one musical mode, then for the next season another. I grew up in a small town so country has a place in my heart and in my musical seasons.

Also, in my youth I had access to two venues for life music that were special. One was Bush Gardens Williamsburg which would get special acts and bands of all kinds appearing. The other was a place called Donk’s Theater which was a country music theater that was functionally in the middle of nowhere. It did draw some major acts though because it was a large, nice location, and would seat hundreds. Over many years I had seen many major performers from the world of country music at one of these two venues. Legends like Dolly Parton, and Kenny Rogers are two that come to mind.

I could write about my trip to Nashville for many pages more. It would take a book to cover all you can do in this amazing town. A feature part of the book would be how amazingly well located the resort is.

If you want to see the best of Nashville and save while you do it, I encourage you to consider this resort location and booking with TZort.