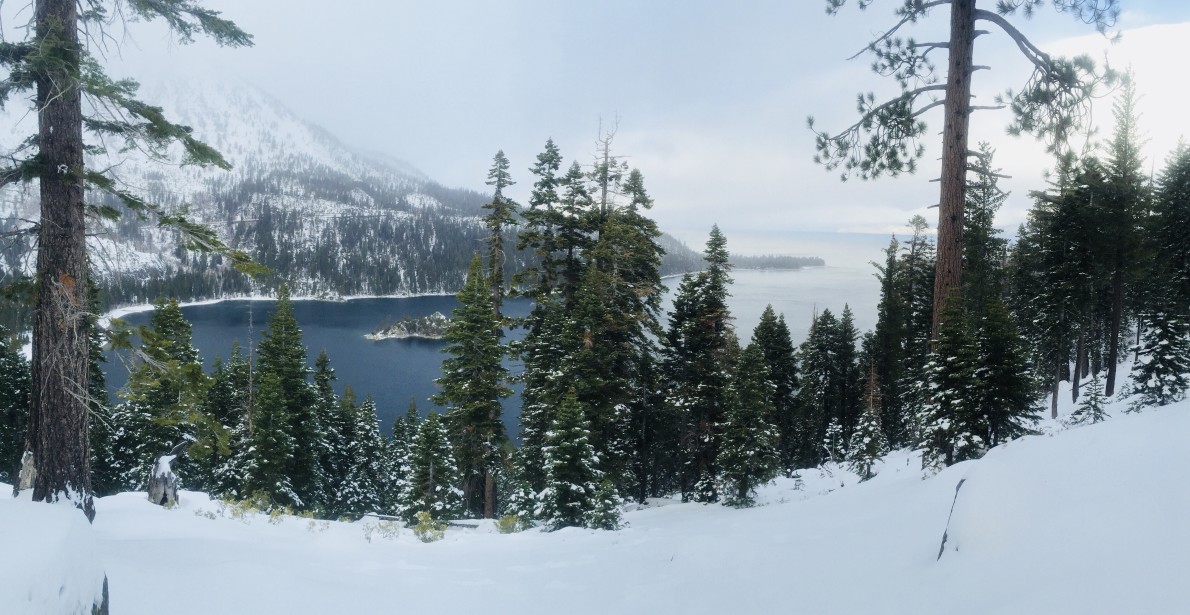 Lake Tahoe is the area and the Zephyr Cove, NV location. The flight to Lake Tahoe (RNO) was about 8 hours. If your ears popped on the plane, just try to pop them when you land. Lake Tahoe itself sits at 6,224 feet.

South Lake Tahoe Airport (RNO) is a short drive to the resort. It is only a 20-minute drive to the resort unless there is snow on the roads and you do not have chains it could take more time. Renting a car, however, from the airport they should make sure your rental has snow tires and chains as needed.

The resort has just about everything one could want. The one-bedroom villa I stayed in was about 900 square feet in size. Each room has a number of features you can depend on.

After checking in, I loved the layout of the villa. There was a large living room with a fireplace. A full kitchen and a king-size bed in the bedroom. The bathroom has a jetted tub and a nice size vanity and sink.

I was in the area for the wintertime with snow on the ground and more at higher elevations. While in town I want to check out some local ski resorts, which are some of the best in the Nation.

First on deck will be Heavenly Ski Resort. Heavenly and I had an appointment tomorrow morning. I am not much of a skier, so I booked an instructor to help get me sorted.

Until then I wanted to settle in and get some rest for tomorrow, but not until after scoring some food. Luckily there is a grocery store right across the street from the resort. It is a Safeway chain store, and there was also an Italian Restaurant called Capisce they had a great veal parmesan and a solid lasagna. So, I ate one and took one with me. The lasagna I thought would last better and may even taste better later today or tomorrow.

I also grabbed some breakfast and snack items from Safeway. I was not sure how I would handle the altitude tomorrow, so I stayed away from anything carbonated to drink. That meant no beer or colas.

I wanted to get started on my day, so I only ate a light breakfast after waking and showering. I had brought some ski pants and a decent jacket that I had purchased just for the trip. My lesson from the professionals was at 9:30 AM, so I had to hit the ground running. I called in a favor and had a 1 on 1 instructor set up. Here you do not need a hook-up if you have the funds. A half-day of 1-1 is a little over $600 but these are some of the best instructors on the planet so they are worth the cost. I needed the attention, and I did not want to feel like a complete moron in front of others. How bad I am skiing I could have joined a kid’s class and learned almost as much.

I needed help to get the feel of things. Until now I had only been skiing in Virginia and West Virginia, which is a whole different animal. Here when you get off the ski lift you are at over 10,000 ft, which is insane. I was glad I had stayed away from anything carbonated because my stomach and intestines did not care for the altitude.

After I arrived, the instructor took her time and made sure I felt comfortable in the bindings of my skis. Then we found a practice area, and I took short trips down, finding my balance, and moving my bodyweight. Then it was tutorials on how to speed up and more importantly slow down when needed. Working with the instructor, you also get to skip all the lift lines and really maximize your time.

If you could not skip the lines and it was busy, it would really negatively impact your training, so this was a great feature, and I would say it was a must.

After half a day, my out-of-shape self was ready to collapse from exhaustion. But I did not want to drive back to the resort in the snow as tired as I was at the moment. So instead, I went for lunch and a drink to relax. Little did I know my tiredness would be replaced with a food challenge. At a Heavenly spot called Booyah’s they have a 2.33-pound burger challenge. Let me tell you, this is something I was born for. Not only born but trained without knowing that I was training for this.

The only challenging part in my mind was the time limit of 30 minutes. Well, I had just had a major workout. I felt if the burger was cooked right for me, this would be a song in the park. Well, at 22 minutes I was already using the napkin to clean myself up. One successful giant burger down. It was harder without the cola, but I did not dare have anything carbonated and put this much food into my body.

After stuffing myself to the brim, I decided it would be a good idea for me to get back to the resort and private restroom facilities in a timely manner. If you have ever eaten something like this, you already know that when you overdo it, your body has an incredible ability to speed the digestive process up.

Not that you dear reader want to know this, but it is the truth. In my 30s I held the State Fare record in Virginia one year for the most milk consumed at one time. I had 14 glasses of milk on a dare with my best friend. I was not aware that it was possible to drown myself at that time. So, like a fool I overshot the current most glasses drank by 6 glasses. Figuring I would not be beaten the entire rest of the fare. For that feat of mass consumption, I only got my name on the board in chalk. At least for the burger, it was free, and my name went up on a board or award plaque. What I did learn at that State Fare was that what you put in must rapidly come out when you do too much. In that case, it just meant that the milk went right through my system like it bypassed my liver entirely. Most likely I found out years later that I had overfilled my liver and that was why the effect was almost immediate.

Lucky for me, the burger did not have that effect. By some stroke of luck and good karma (glad I tipped the instructor well), I made it back to the resort and my room in one piece. By the time my road trip was over, however, I was not only ready for a nap, I also needed to test out the facilities in the room. Not in a bad way, just in the silly you fool you ate more than 2lbs of meat in one sitting way.

You would think after that meal I would not eat again the entire trip, but later than night, I was hungry again. Which I know sounds insane. But I think when you eat that much sometimes you just stretch your stomach and once enough digestion takes place, boom you are hungry again.

Good thing I had the lasagna, it made a fast and great dinner. I also did not feel like going anywhere. I was tired, sore, and just done for. So I called it a night and went to sleep.

I woke with the intent of going back to the ski resort and testing out my new skills on the slopes. I chose to go back to Heavenly because I figured I knew the lifts and the instructor had pointed me to the best runs down the mountain to do by myself during the rest of my trip. So, I followed her advice.

When I hit the slopes, I found myself steering away from the giant burgers and food in general. I got a pass for the day and also checked my travel insurance policy (yeah, I know a nerdy thing to do) but I wanted to make sure if I broke a leg, or needed to be flown off the mountain I had coverage. Just because I felt it entirely possible that I could need it if my lessons were suddenly forgotten on the mountain.

At Heavenly Epic Coverage is free with every pass and does give you peace of mind the coverage is like travel insurance to refund the cost of your tickets in the event of many potential losses. That is an interesting feature and looking back now I bet many people used the coverage during the last season due to COVID-19 and it likely saved them a pretty penny.

Near Tahoe there are several major ski resorts. I chose Heavenly because I have a loved one that works there. But there is also Squaw Valley, Kirkwood, NorthStar, Sugar Bowl, and Sierra to name just a few.

Again guys I am not the world’s greatest skier but I am the guy you want to call in for a game of Anchor for food contests, and on the right day still a drinking contest or two. But for the big snow fans, this area is likely one of the best in the world.

My day at Heavenly went better than I expected. I not only survived, but I thrived. I found my own way up and down the mountain 5 times during the day. But even with breaks in between runs, I knew I was going to hurt for like a week. It is amazing how taxing and physical skiing is. Your legs and rear-end get some real work going down the mountain.

My goal now was to make it back to the resort and into the jet tub. Then later make it out of the tub again. I had to set that as a goal because I knew I was going to have muscles sore in places I forgot that I had.

I also really noticed the altitude again today. My head pounded by the end of the day and I was glad I had booked the room for another day because I think I needed tomorrow just to recover enough to handle the flight back. This was a great vacation, but the most active one I can remember in well over a decade. It is so much more active skiing than walking around amusement parks or even hiking. I am very glad I did it this year because the older I get, the less likely I think I would be able to do this.

Later the tub felt great but at one point I was sure if I did not have my upper body strength, I would have had to call for help to get out of the tub, or let it drain then have someone bring me a pillow and a blanket. This is not an exaggeration, I clearly overdid it.

Travel with Tzort to get the best rates on this and many other resorts.